Airports join airlines in tightening the leash on animal travel 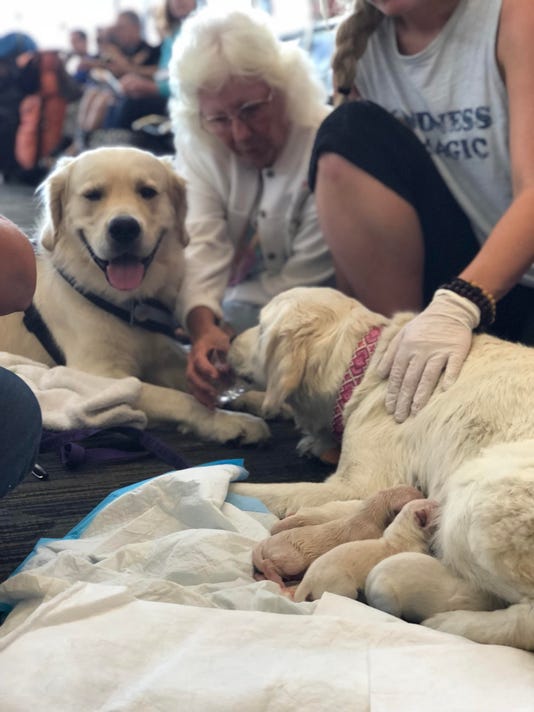 There were plenty of “aw, that’s so cute” social media posts last month when Eleanor Rigby, one of two service dog vest-wearing golden retrievers accompanying a passenger to Philadelphia on American Airlines, went into labor and gave birth to eight puppies in a gate area at Tampa International Airport.

No one was charmed, however, by the Reddit report comedian Steve Hofstetter posted last February of a passenger at Los Angeles International Airport who replied “they have people for that” when asked if she planned to clean up after her dog did its business on the airport floor.

Yet both stories are examples of a wide range of animal-related incidents that are forcing airports to expend extra resources and causing them to rethink policies governing animals in the terminals.

TPA officials point out that airports have no say over the animals that airlines allow on board.

“We were just there to help with the situation and are happy the puppies were delivered safely,” TPA spokeswoman Emily Nipps said.

Tampa International Airport hasn’t yet tallied up its exact costs for having paramedics, operations, communications and maintenance staff spend several hours attending to Eleanor Rigby and her new puppies during the airport delivery, “but having paramedics assisting a dog in labor could have potentially impacted a medical emergency on another side of the airport,” Nipps said.

Cleaning up the rules and the messes

As had been widely reported, airlines have seen a sharp rise in the number of animals traveling on planes. Some are ticketed pets, but many are pets that have been flying for free thanks to loopholes in rules governing the transport of emotional or psychiatric support animals.

e find them making messes on the airport carpet, interfering with the airport’s working dogs and, on occasion, biting other dogs or passengers,” said Kama Simonds, spokeswoman for Portland International Airport in Oregon.

Last December, a 5-year old girl ended up in the hospital after being bit in the face by an uncrated dog waiting for a flight with its owner at Portland. And a local TV station filming for a report on dog issues at PDX caught a schnauzer in the act of peeing on the airport’s new $13 million carpet.

Many airports hope revised policies for flying with emotional support animals recently rolled out by American Airlines, Alaska Airlines, Delta, JetBlue, United and others will cut down on the number of animals in airport terminals.

“The way we see it, if the airlines put more specific and stricter guidelines in place to manage the issue, it will take care of the problem in the airport too,” the TPA’s Nipps said. “So we support the airlines in tightening up the policies.”

For its part, Airports Council International-North America, the membership organization that represents and advises most U.S. airports, is urging the Department of Transportation to clarify its rules.

“We want DOT to clearly articulate that airports are within their rights under the Americans with Disabilities Act to require anyone bringing an emotional support animal through an airport terminal to house those animals in carriers so they don’t interfere with other passengers, employees, staff or other animals, including service animals and TSA and police canine units,” said Thomas Devine, ACI-NA’s general counsel.

DOT is currently taking comments through July 9 on proposed rulemaking related to traveling by air with service animals, and ACI-NA will join the public and other industry groups in filing comments.

But at least one airport is not waiting for DOT to get around to making its final ruling.

After consulting with other airports, including San Francisco International, Detroit Metropolitan and Fairbanks International Airport, this week (or next) Portland International Airport will issue new rules aimed at clearly defining the different categories of traveling animals – pets, emotional support animals and service animals – and clarifying how the airport expects travelers to care for these animals while in the terminal.

“We see many people bring their pets when meeting and greeting people in the terminal. That’s a no-no,” PDX spokesperson Simonds said, “Pets should not be at the airport unless they are traveling or being shipped.”

And if a traveler’s animal urinates or defecates on the floor at PDX, the new rules will require an owner to remain at the site until someone from the janitorial staff arrives.

During July, airport operations staff at PDX will start spreading the word about the new rules. Come August, though, warnings and citations for bad dogs could be issued, with possible fines of up to $250.

This Airport Hotel Is Now Pampering Dogs with Dinner and Drinks