An emotional support animal is just a mouse click away

There are very few rules governing emotional support animals, and there is no official registry, so it’s hard to establish how many there are. To present a pet – whether a dog, a ferret or a snake – as an emotional support animal, all one has to do is provide a letter written by a licensed mental health practitioner attesting to the psychological benefit of that pet’s presence. Though emotional support animals sometimes show up at restaurants and other public places, unlike service dogs, the Fair Housing Act and the Air Carrier Access Act limit them to housing and air travel only.

While the spirit of the law may have been intended to allow mental health professionals to better serve the needs of their patients, it has also enabled a whole new business to flourish. Multiple online companies now provide these official letters without ever seeing anyone in person.

Simply pay them a fee in the $150 – $200 range, fill out an open-ended questionnaire online and within 24 hours, your ferret could be sitting on your lap during that Thanksgiving flight home, with no extra airline fee. 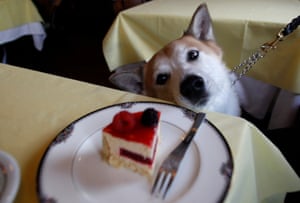 There are very few rules governing emotional support animals, leading for something of a “free-for-all” Photograph: Yuya Shino/REUTERS

Since these services provide an emotional support letter without meeting the patient, it is relatively easy for anyone to obtain one.

While there are laws in a few states against misrepresenting a pet as an emotional support or service animal, there are no federal laws against it.

“Presently this area is a free-for-all,” says Rebecca Johnson, director of the Research Center for Human-Animal Interactionat the University of Missouri College of Veterinary Medicine. She suggests this lack of regulation may eventually hurt those who actually need support animals to function.

“It makes it difficult for people who truly need an emotional support animal to travel,” says Rebecca Huss, an animal law expert and law professor at Valparaiso University. “Everyone looks at them as a fraudster.”

I decided to see just how easy it is to be a fraudster and get approved for an emotional support letter by applying to a few of these online services.

I chose to highlight symptoms most of us living in a big city experience: anxiety and trouble sleeping. On top of that, I added the true story of a close family member’s death.

The portrait I painted was of an anxious woman, tired from lack of sleep, who avoids parties where she does not know everyone but still functions in her everyday life, with family, friends and a spouse to support her. She gets a little depressed on some days but not others, and recently had a tragic family death.

The websites allow you to choose different plans – a letter just for flying or a letter for housing and flying – for different fee structures. I chose the flight letter option simply because it was the cheapest, and if I was going to waste the Guardian’s money on an imaginary dog, I figured it was best to go with the bare bones package.

The process for getting an ESA online is remarkably similar from company to company. I chose two of the most popular companies: The Dogtor andCertaPet.

The Dogtor requires no human interaction, but the form, which the company says takes 30 minutes to fill out, took me over an hour. Almost all the questions are open-ended and you are given a lot of space to write in detail about your mental health issues. If you are not approved, the company will refund your fee.

At CertaPet, I was required to fill out the form for a specific animal and explain how it helps me. (I used the family dog, Roscoe, as a proxy for my non-existent pet.) The form CertaPet had me fill out online was half open-ended questions and half survey, with questions that focused on everything from schizophrenia to manic episodes to the standard issues of depression, anxiety and PTSD. Like The Dogtor, if you are not approved, they will refund you.

Unlike The Dogtor, CertaPet had a remarkably kind sounding social worker call me within two hours of filing the form. We chatted for about three minutes, after which she kindly told me she would approve my letter. She also told me to save her phone number and call or email her if I needed anything, which I found oddly moving.

The Dogtor simply sent me an email from a therapist about 8 hours after I had filed the form. In the email, the therapist focused on the family death, saying a few kind words of sympathy and advised me to see a psychiatrist.

Just like that, in less than 12 hours, I had two emotional support animal letters in my inbox. According to the letters, I was also now the patient of each of the therapists who had signed off on my letters.

A proper emotional support animal prescription should come from someone who is treating the patient and knows their mental health condition, according to Philip Tedeschi, executive director of the Institute for Human-Animal Connection at the University of Denver. It should also take into consideration the living circumstances of the animal. If the emotional support animal is living in circumstances it is not suited for – like a dog that is left alone all day – it can become a health issue for the animal and a source of stress for both the animal and patient.

The way the system is set up presents a challenge for businesses. No one wants to get sued for mistaking a pet for an emotional support animal or a service.

Businesses that don’t want to accommodate animals have little recourse at the moment, says William Goren, an attorney specializing in disability law. Though, if an animal eats a table leg or poops on the carpet, businesses can still ask them to leave.

So far, the government has not pushed back against these online services and the proliferation of fuzzy companions skipping over housing and airline restrictions. Awareness of how easily people obtain these pet prescriptions online, however, is rising. When emailing me my letter, The Dogtor noted that United Airlines and American Airlines require extra forms to be completed by a mental health professional in addition to the emotional support animal letter. Businesses can’t question a prescription, but they can make it a little harder to cheat the system.

Changes to the rules around what constitutes a proper prescription are not likely to come anytime soon, so the online emotional support animal prescription services are here to stay for now. While that might lead to some people gaming the system, imposing more hurdles can be an issue too, leading to a delicate balancing act. When it comes to those with real disability, “we want to encourage access, not discourage it,” says Huss. Even if that means someone without disability getting a free flight for their ferret.

Travel safely with your pet by car, airplane, ship or train