Allergic to Dogs on a Flight? What Travelers Need to Know 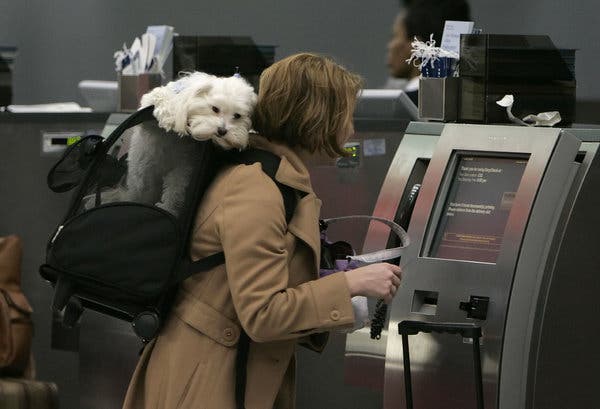 A 7-year-old boy and his parents were asked to leave their Allegiant Air flight from Bellingham, Wash., to Phoenix last week after the boy developed an allergic reaction to a dog, a service animal, on the plane, according to several news reports. The flight was delayed about 90 minutes and some passengers were said to have applauded when the child was leaving.

Putting aside the pitiless behaviour of travellers (the boy’s father has throat cancer), what recourse do fliers have when their allergies flare up? Answers to these and other questions on protocol follow.

Q. Should fliers today assume every plane carries a dog or another pet?

A. A plane may or may not carry an animal, and airlines place limits on the number of pets in each cabin. For example, on domestic flights Delta Air Lines allows two pets maximum in first class, two in business and four in its main cabin, at an additional cost to the passenger and with restrictions on breed and size.

Service animals are an exception, however, and must be accommodated by airlines at no charge, according to the Department of Transportation. There is no limit on service animals aboard an aircraft, and they are not considered pets and counted against the pet limit.

“I would say almost every plane has had a dog in the last month, and they’re not deep cleaned very often. You still have dander, and if you’re highly allergic you may react to it,” said George Hobica, founder of Airfarewatchdog.com.

How do airlines manage people who have allergies to pets or service animals aboard a flight?

Most airlines will try to accommodate allergy sufferers by reseating them. “We will reseat them in a place furthest from the animal or if that is not acceptable or available we will put them on the next available flight at no additional cost,” said Ross Feinstein, spokesman for American Airlines.

How should fliers with allergies prepare themselves for travel?

“If you are travelling, call the airline or the train ahead of time to find out what their policies are so you are well-informed going into the trip,” said Dr Cary Sennett, chief executive of the Asthma and Allergy Foundation of America. “If you are bothered while travelling, you have to say something to the person next to you or to the flight attendant. It’s important to have your medications with you in your carry-on and not checked, and to ensure the medications are up-to-date.” For those with severe allergic reactions, which is not uncommon in cases like peanut allergies, he recommends keeping the medication epinephrine and auto-injectors at hand.

What is the airline protocol in the event of a medical emergency?

Allegiant Air explained its actions in the following emailed message, “In instances where passengers become ill or experience other medical issues, Allegiant, like many major air carriers, works with a third party organization to make decisions to ensure the safety of the passenger in question. This third party team includes medical doctors who are available 24 hours a day to provide guidance to our ground and in-flight crew members. Based on the advice of the third party physician, decisions are made about whether or not it is the safest course of action to allow a passenger to continue on board.”

What would an airline do if this had happened in the air?

In addition to carrying first aid and medical kits, most airlines have medical support on call. Over 130 global airlines contract with MedAire to supply advice. According to Dr Paulo M. Alves, a global medical director with MedAire, the most common ailments are gastrointestinal, involving nausea and vomiting, followed by common fainting and seizures. With chest pains or strokes, the company usually recommends diverting the flight because the time to treatment is critical, although the judgment ultimately rests with the pilot who must weigh security concerns and the well-being of the other passengers.

Only 3.5 per cent of calls MedAire receives are allergy related. “Only a minority are severe, and out of those, it’s rarely the first event,” he said. “Those who have them have had them, have usually had in the past. But in medicine, as in love, there’s no 100 per cent.”

Why did it take the family an additional two days to get another flight?

While passengers who are bumped from a flight are usually booked on the next available flight, availability may be an issue with a low-cost carrier that doesn’t fly the route frequently, which was the case with Allegiant.

“A lot of low-cost carriers often don’t offer daily service,” said Gary Leff, who writes the blog View from the Wing. “You might have to wait a few days for the next flight. If you were on one of the major carriers, they often have multiple ways of getting to a destination on a given day. That’s why I prefer legacy carriers with substantial route networks. It’s the same with service or weather events. They can route around them.”

It’s said that a flight attendant “smirked” at the family of the child. How should the crew have handled the situation?

“They certainly shouldn’t smirk,” Mr Hobica said. “They should be understanding and as diplomatic as possible.”

The Best and Worst Cities to Be a Dog

All Aboard, Fido and Fluffy!

No Replies to "Allergic to Dogs on a Flight? What Travelers Need to Know"